TOMORROW is Cinco de Mayo, and while the rest of the country is overdosing on Corona and quesadillas, may we suggest cabernet and crepes? France, it turns out, has more to do with Mexican food than you might think.

In November 1838, 26 French warships opened fire on the Mexican port city of Veracruz, sparking the Pastry War. Apparently, a pâtisserie was among many French businesses looted in the anarchy of post-Independence Mexico. France demanded 600,000 pesos in damages. When Mexico refused, out came the cannonballs.

French troops returned to Mexico in 1861 under Emperor Napoleon III. On May 5, 1862, 6,500 French infantrymen suffered a surprise defeat by 2,000 Mexican troops and Indians at the Battle of Puebla. The 5th of May, or cinco de mayo, became a symbol of Mexican nationalism. Napoleon returned a year later with 30,000 troops, crushed all resistance and installed an Austrian archduke and his wife as Emperor Maximilian and Empress Carlota of Mexico.

On the food front, the French invasion of Mexico began as far back as the late 18th century. When Mexico was under Spanish control, wealthy criollo families (Mexican-born Spaniards) began importing French chefs, architects and tailors to school them in the ways of European society.

Estela Salas Silva is a Mexican chef whose maternal great-great-grandmother Angela was a young Frenchwoman who went to Mexico in the 1860’s to work in the wealthy homes of Puebla. Today, Mrs. Silva operates a cooking school called Mexican Home Cooking (mexicanhomecooking.com, 011-52-246-46-809-78) in the tiny state of Tlaxcala, two hours from Mexico City.

“She came for adventure,” Mrs. Silva said of Angela, “and to teach French to the rich children.” Angela was also expected to help cook French meals.

MEXICO’S French fascination intensified during the brief “empire” (1864-1867), but flourished most colorfully during the nearly continuous reign of President Porfirio Díaz from 1876 to 1911, when Mexico strove to earn a place in the “civilized societies.” Díaz served French feasts at all functions.

Rachel Laudan, a food historian who lives in Guanajuato, said that upper-class Mexicans continued to be raised on Mexicanized French food into the 20th century. “When I talk to my friends here, they will give me recipes for Carlotas, or Charlottes, and talk about turkeys in aspic,” Ms. Laudan said. “All of these things that are integral to the cooking they grew up with.”

Rick Bayless, the chef and author of “Authentic Mexican: Regional Cooking From the Heart of Mexico” (William Morrow, 1987), said that crepes served with the pungent corn fungus huitlacoche or drizzled with goat’s-milk caramel are “real classics of Mexican cooking.” Karen Hursh Graber, a food writer living in Oaxaca, said the volovanes of Veracruz – “puff pastry filled with local flavors like crab meat, fresh tuna, or sweet ones with pineapple” – are direct descendents of the buttery French pastry shell vol-au-vent. And Victor Nava, a Mexico City caterer, added that even the most modest Mexican pastelería will contain cakes and tarts that owe their existence to the French pâtisseries of the 19th century.

Women like Mrs. Silva and her French great-great-grandmother may represent the culinary bridge that allowed French flavors to cross from aristocratic tables to home kitchens. While cooking for the rich, Angela married a Mexican man and moved to a house outside of Puebla.

“My great-great-grandmother threw lots of parties and loved to dance the polka,” said Mrs. Silva, who was told stories about her ancestor. “Everyone would get together on Saturdays, dance and make food. That’s when the French and the indigenous traditions started to mix.”

But hidden among the more standard plates is evidence of Mrs. Silva’s hybrid gastronomic pedigree. She has a recipe for crepes bathed in huitlacoche sauce and another topped with delicate squash blossoms. Her pipián verde con bistec en relleno calls for a thinly sliced beef fillet rolled tightly around bacon and julienned carrots and potatoes, then braised in the classic regional chili sauce. (Alain Sailhac, dean of the French Culinary Institute in Manhattan, said the stuffed beef preparation is essentially a French paupiette de boeuf.) For dessert, Mrs. Silva serves gaznates, cylinders of fried dough moistened with tomatillos and filled with rum-infused whipped cream.

“French and Mexican food mixed from the very beginning, because the French cooks couldn’t find the same ingredients here,” Mrs. Silva said. “But they never made spicy, spicy food.”

Mrs. Silva moved to California when she was 17 to work at her aunt’s Mexican restaurant in Marin County. She, too, fell in love with a local, but not the Americanized Mexican food she was cooking.

Seven years ago Mrs. Silva opened her Tlaxcala cooking school with her husband, Jon Jarvis. “My joy of cooking came from my ancestors,” Mrs. Silva said. “Now my great-great-grandmother’s French recipes, mixed with my family’s Spanish and Indian recipes, are being passed on to New York, Europe and Korea, where even more layers are being added. ‘Buen provecho!’ I always tell my students. ‘Bon appétit!’ ” 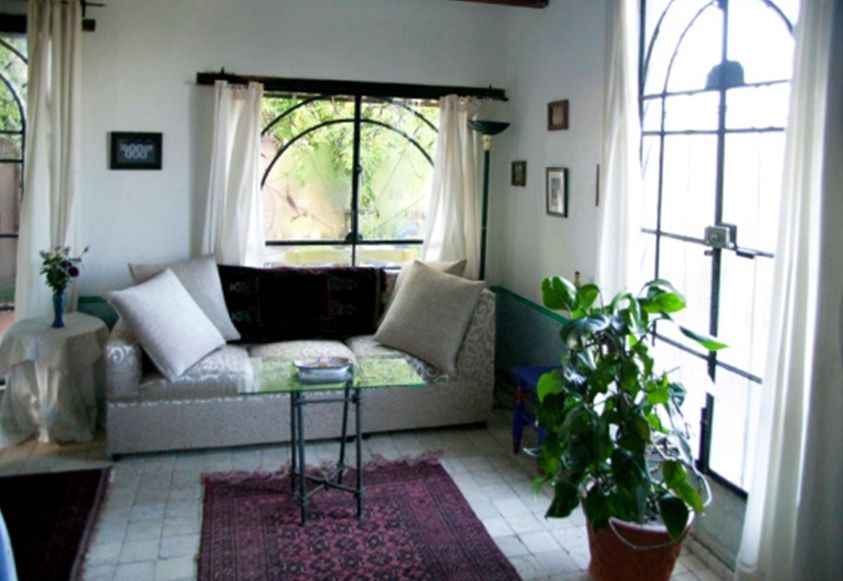 Our accommodations include your choice of a double room, detached garden cottage, and a two room suite. Each is unique, built and furnished using local materials in the traditions of indigenous, Spanish, Moorish, and French cultures that mixed in this area. Read More about “Accommodations”…

Rated #1 Mexican Cooking School in the cuisine of Puebla!