While researching Mexican food for Traveler’s “Mexico: 50 Discoveries” supplement, IT blogger Kristen Gunderson not only developed massive enchilada cravings, but she also became smitten with the Mexican Home Cooking school, a place that allows vacationers a true taste of authentic Mexico. Visitors – of any culinary skill level – can spend a week in the home of a Mexican chef and learn to prepare local delicacies while exploring the Puebla region’s most outstanding natural features. The school’s owner, Chef Estela Silva, has been a kitchen employee from the age of 7 and was even featured in the New York Times for her gastronomic know-how. Recently she paused from her busy cooking schedule for a Q&A with Kristen about Mexican cuisine and what’s it’s like to stay at her school. 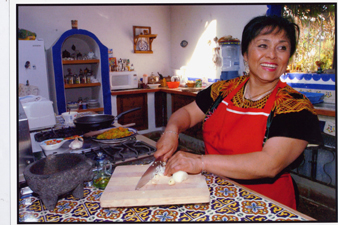 What is the most unique aspect of Mexican cooking?
The cuisine reflects the culture here, in that the simplicity of the ingredients are used to prepare wonderfully complex and sophisticated cuisine. Many times the ingredients of life are very poor here and miracles are produced in the cuisine, buildings, and artwork. Mexicans have produced wonders from what is available at hand for generations.

Take chiles, for example: The school’s first day begins with a lesson on chiles. Yes they are hot, but they are used more for flavor. It is a mistaken belief that Mexican food has to be hot. It has to be delicious and then you create the amount of heat that you want. We use chiles just like you use salt and pepper.

How does learning about the area’s cuisine give your students an authentic “taste” of the local culture?
In the area of Puebla, our cuisine is very important to getting a “sense of place.” We first began with our indigenous cuisine, then the Spanish invasion came, bringing 400 years of Arab influence, with cumin, whole cloves, cinnamon, sesame seeds and many more Arab spices, which merged and enhanced our original kitchen. Then came a special touch to the Puebla area: With the French invasion in the 1860s, our culture changed once more. The indigenous, Spanish (Arab), and French mixture is a unique culinary combination in Mexico and indeed the world.

This influence can be seen in the food “Pipian Verde con Bictec en Relleno” (Green Pipian with Beef Rolls). It is a dish from the area that is very typical and reflects these culinary traditions: The pipian sauce is pre-Hispanic; the addition of cumin is a nod to the Arabs; and along with the paupiette de boeuf from Paris, they produce a classic poblano dish known throughout Mexico.

Does your cooking school offer opportunities for visitors to explore the region outside of the kitchen? Take me through a typical day.
The school is open to anyone of any skill level who has an interest in learning to cook traditional Mexican food. Each class we prepare between five and seven recipes in my home kitchen, which will become lunch and dinner. Lunch includes soup, or maybe a salad, and a main dish, such as beef in pasilla sauce and some type of rice. Dinner could be pipian rojo with pork or rabbit in adobo sauce, and a dessert of gasnates (cream-filled pastry tubes topped with chocolate and powdered sugar – no, that is not hard to make). All this is of course complemented with stories, music, a glass of wine or beer, and no extra charge for the fun that we have doing it all.

Lunch is served on the terrace with soft drinks or wine, beer or margaritas. Afterwards it is siesta time. Students can catch up on reading or go off for an afternoon trip. We have cabs that work with us to visit ruins or the city of Puebla, and students can hike on an extinct pine-covered volcano, see hot springs or visit ex-haciendas that are usually closed to the public.

On the last night, there is a small graduation fiesta with live music before dinner. Students then get a bound copy of the recipes of the week as a memento and cookbook.

What inspired you to create the cooking school?
My school has been open about 12 years. I opened it to pass on the many traditional recipes from the city of Puebla that are being lost as time goes by. Ironically, I have ended up passing them on more to non-Mexicans than Mexicans. But that is all right with me as long as they are not lost.

What do you enjoy most about your job?
The most rewarding part for me is to see people come from all over the world and discover that Mexican cuisine is much, much more extensive then they dreamed and as sophisticated or more so than others. And the plus is that they find how easy it is to prepare and have fun cooking here in the process.