Long before there was “Mexican Cuisine” the Olmecs, Zapotecs, Totonacs, Toltecs, and Aztecs came and intermixed their cultures, customs, and kitchens. For thousands of years before the Europeans arrived, before Rome was even a village, a sophisticated cuisine was developing here. Our Mexican Cooking School, Mexican Home Cooking, explores the vast cultures involved in the building of Mexican Cuisine and the cuisine of the city of Puebla

When the Spanish came in 1619 the mixture of kitchens began. Many indigenous dishes were accepted and adapted but much more were lost.

The most common ingredients for the endless varieties of today’s “Poblano” Cuisine include tomato, onion, cinnamon, tortilla, chiles – including anchos, pasillas, mulattos and chipotles –  pumpkin seeds, raisins, cloves, sesame seeds, almonds, tomatillos, oil, garlic and salt. Nearly half these ingredients arrived in the New World with the Spanish.

What is not often noted is that all the forms of “Spanish” culture came with a strong “Middle Eastern” influence due to the Moorish rule of Spain for 500 years.The influence of the Middle East and Persia are particularly apparent in the cuisine of Puebla in its use of numerous fruits and spices – such as cinnamon, ginger, sesame seeds, cloves, cumin and nutmeg.

In 1863 the French invaded putting Maximiliano on the throne and a French Court to Mexico City. Puebla took in the French adding a touch of their cuisine to ours making our sauces, soups and pastries even more complex and unique.

The real gourmet cooking here was kept in households as “Home Cooking” for special occasions; it is never found in restaurant kitchens and nearly lost to the present generation of Mexicans as the culture is changing from outside influences. 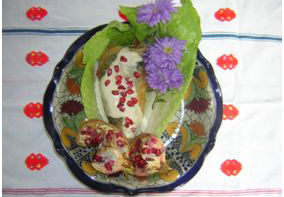 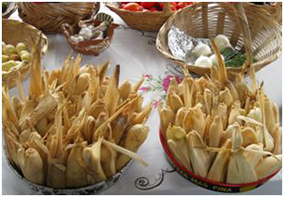